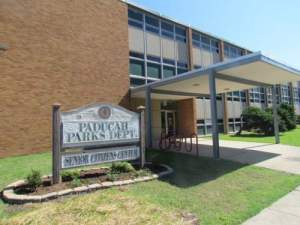 The facility is located on 0.8 acres which used to be the West Kentucky Industrial College.  The historical marker in front of the building reads:

The Paducah/McCracken County Senior Center and offices (270-443-8579) are housed in the Paducah Parks building.  Senior center programs, meal program, dining room, and the senior activity room are independent of the Paducah Parks and Recreation Department. The Senior Center is working to construct a new facility near the intersection of Kentucky Avenue and 16th Street.