The Paducah Police Department held its 10th annual Awards Ceremony on February 28, 2019, at Walker Hall in downtown Paducah. Thirty-one employees and three civilians were honored for their work in 2018.  Visit Awards and Recognition Criteria for a list of the possible awards and the criteria used in judging. 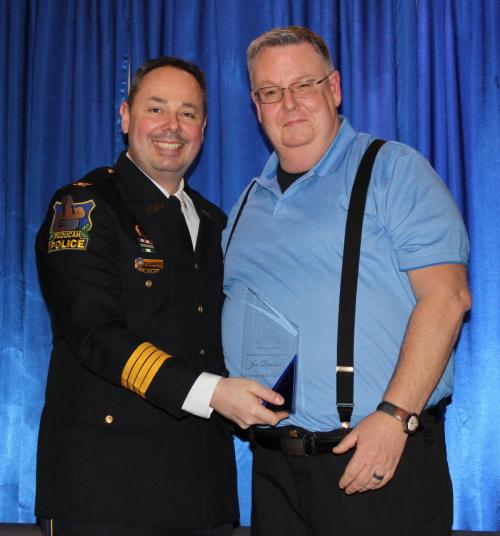 Parking Control and Equipment Specialist Jon Boulton (pictured with Chief Brian Laird) was named 2018 Employee of the Year.  Boulton has been employed since August 2014.  He was nominated by Capt. Justin Crowell.  Nomination Letter for Jon Boulton

Jerry Beyer was recognized for his assistance in designing, acquiring and placing footstones at the graves of four fallen Paducah police officers.

Michael Gaia and Ernie Scarritt were honored for their assistance to officers who were struggling to arrest suspects before additional officers arrived.

The 2018 Governor's Impaired Driving Enforcement Awards Ceremony was held December 12, 2018, in Lexington.  Awards were presented to officers with the most impaired-driving arrests in each agency.  Officer Danny Slack received the award for the Paducah Police Department.  Officer Slack was responsible for 22 of the department's DUI-related arrests in a 12 month period.