About the Awards and Recognition Ceremony

The Paducah Police Department held its 11th annual Awards Ceremony on February 4, 2020, at Walker Hall in downtown Paducah. Employees and civilians were honored for their work in 2019.  Visit Awards and Recognition Criteria for a list of the possible awards and the criteria used in judging. 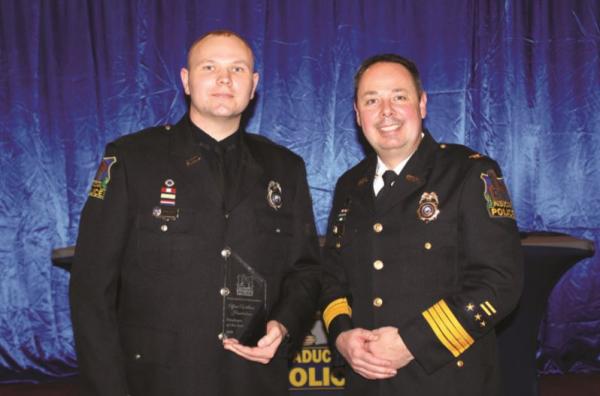 Each year, the Chief of Police has the difficult task of selecting one employee nominated by his or her peers, whose performance of duties rose above all others during the previous year.  For his hard work and demonstration of leadership, dedication and compassion, Officer Hendrickson was chosen as the Paducah Police Department’s 2019 Employee of the Year.

Officer Hendrickson is a relatively young officer, having served with the Paducah Police Department since August 3, 2017.  He was nominated by Officer Adam Brown.  In his nomination, Officer Brown said, “As a patrolman, I do not get the benefit of observing the hard work of administration.  I generally just reap the benefit.  What I see is primarily the day in and day out grind of the brunt work of policing.  I see how effective patrolmen handle calls for service, how they deal with stress on those calls, and the way they demonstrate leadership.”

“In 2019, I witnessed and listened to Officer William Hendrickson on numerous occasions demonstrate veteran officer skills even though he has but only a few years on the force.  He constantly monitors his radio and the system we utilize to display the calls for service, which generally leads to a hasty call response with great knowledge of the situation.”

“He has saved lives this year,” Officer Brown said.  “We know Officer Hendrickson to be an intelligent and extremely active officer.  Anyone would agree that the Employee of the Year should awarded to the hardest working employee that genuinely brings value to the department.”

During 2019, Officer Hendrickson compiled some impressive statistics for his first full year of service.  He recorded 1,391 calls for service; 1,034 of those calls were self-initiated.  He had 479 traffic stops and a total of 213 citations.  Of those, 158 were traffic citations, 54 were criminal citations and one was a juvenile citation.  Officer Hendrickson had 112 arrests – 34 of them traffic arrests, 36 criminal arrests and 42 warrant arrests.