The Kentucky League of Cities (KLC) notified the City of Paducah recently that Paducah is the 2022 KLC City Government of the Year. The award recognizes a city that has elevated its community through quality governance or done something transformational for the city. An independent board of judges from around the state selected Paducah which applied based upon the City Commission’s decision to prioritize the Southside and develop the Southside Rise & Shine Neighborhood Spruce Up initiative.

“Community innovation is a pillar of the Kentucky League of City’s mission statement, and we are excited that this year’s City Government of the Year award winner exemplifies that goal,” said KLC Executive Director/CEO J.D. Chaney. “Paducah city officials and employees made a unified commitment to embrace neighborhood empowerment and grow pride in areas of the city that have not always been at the forefront. The city’s impact is testament to the ability of city officials to reenergize communities, create new economic development opportunities, and enhance the quality of life. We are proud to recognize the City of Paducah and look forward to seeing the long-term impact of its Rise & Shine program.”

Paducah Mayor George Bray said, “All of the City Commission’s priorities are designed to elevate Paducah’s status and improve the quality of life for our citizens.  The Southside initiative is a long-term project designed to breathe life back into an area of town where so many grew up and spent so much time in our youths. Our plan is to revitalize the eight Southside neighborhoods and instill a renewed sense of pride in that area. I am absolutely thrilled that this initiative is being recognized. I am truly honored to be a member of the Paducah Board of Commissioners and the City team that achieved this recognition, and I want to thank KLC for recognizing the hard work that Paducah is doing to make transformations that will benefit generations to come.”

“Southside Rise & Shine was successful due to partnerships, volunteers, and incredible coordination by Team Paducah,” said Paducah City Manager Daron Jordan.  “This initial first phase laid the foundation to a collaborative partnership with the Southside Steering Committee and will serve to help us further engage with the Southside neighborhoods.  Our team looks forward to building on the momentum from these initial efforts to further enhance the social, economic, and environmental well-being of Paducah’s Southside.”

Paducah will be recognized at the KLC Conference & Expo which will be held September 20-23 in Owensboro.  Plus, KLC representatives will travel to Paducah to make a formal presentation.

About the Southside Priority and the Rise & Shine Initiative  Paducah’s Southside emerged as one of the focus areas selected by the Paducah Board of Commissioners at a strategic planning session in February 2021.  After two well-attended public meetings in March 2021, the City determined that two main themes emerged: making contacts and beautification.  City staff then worked with partner agencies and volunteers to develop the eight-week long Southside Rise & Shine Neighborhood Spruce Up during the summer of 2021.  Each week, one of the eight neighborhoods was the focus for enhanced Public Works services and a Sunday celebration event with food, fun, and informational resource booths.

The total investment in the Southside Rise & Shine initiative is an estimated $60,000.   A few of the statistics are as follows:

Currently, the City is working with the Southside Steering Committee to determine enhancements for the area’s largest park, Robert Coleman Park.  Plus, the Committee will be reviewing proposed residential and commercial incentive programs. 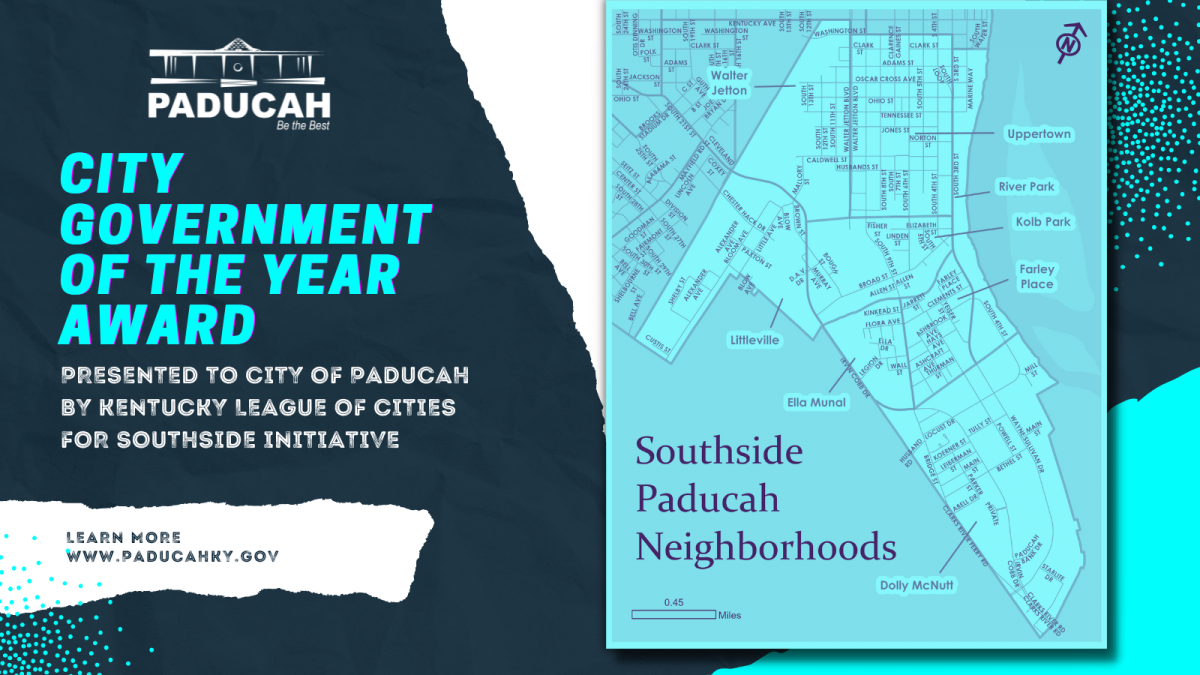