Our Common Neighborhood - The Riverfront

The City of Paducah is receiving significant funding through the Better Utilizing Investments to Leverage Development (BUILD) Grant program.  In July 2019, the City submitted a grant application to the U.S. Department of Transportation requesting funding to improve various transportation elements along the downtown riverfront.

Paducah will be receiving $10.4 million for the Riverfront Commons project which includes

The Paducah Commons Small Area Master Plan covers an approximately six square block area located on the Paducah riverfront between the Convention Center and the rehabilitated Schultz Park and transient dock. The site is key in that it exists adjacent to the Holiday Inn Paducah Riverfront which opened in 2017.  The park will act as a major transition between Downtown Paducah and the Convention Center.  The City is interested in how the space may be used as a new park and how the park may connect the Riverfront as a spur to private redevelopment in Lowertown and from the Convention Center to Downtown.  The master plan, which was completed in 2015, has the following goals:

Blending the new park into the overall city development pattern, Facilitating pedestrian and vehicular traffic from the riverfront to the downtown core and back,

The process was a collaborative effort between RATIO’s project design team and the Paducah riverfront stakeholders of neighborhood, community and business leaders.

September 2016:  This is aerial footage of the Riverfront Redevelopment Project taken in mid-September 2016.  It shows the base of the large park, the revetment (stone steps), and the pilings for the gangway and transient dock which will arrive in November 2016. Thank you to Bacon, Farmer, Workman Engineering and Testing for providing the video.

November 2012:  On November 2, 2012, the City held an infill ceremony with the tossing of colored sand to represent the building of a new land mass to expand Schultz Park.  The first step of the project was to build an approximate 3-acre land mass into the Ohio River just downstream of the existing Schultz Park.  Construction commenced in the summer of 2013 to build the park base.  The project had to be moved downstream due to a high concentration of mussels.  The mussels in the new project area have been relocated.  Speakers at the ceremony included former Mayor Bill Paxton, Parks Services Director Mark Thompson, PRDA Board Member Joe Framptom, and Engineering-Public Works Director Rick Murphy.

In June 2005, City of Paducah planning staff encouraged the Paducah City Commission to consider developing a quality waterfront master plan to plan for future development on the river and to show federal delegates this community’s serious commitment to riverfront redevelopment as a means to increase local tourism and spur economic development.  Following on the heels of the success of the Luther F. Carson Center, the Commission agreed and authorized staff to hire a consultant to help the City with a riverfront redevelopment master plan.

By 2006, local elected officials were thanking Senator Mitch McConnell for $5.3 million in federal funds for the improvement of Paducah’s riverfront area.  The City secured more than $6 million in additional funding and worked through the extensive permitting process.  The original plan has changed due to the presence of mussels in the Ohio River and the consensus to shift part of the project 500 feet downstream. 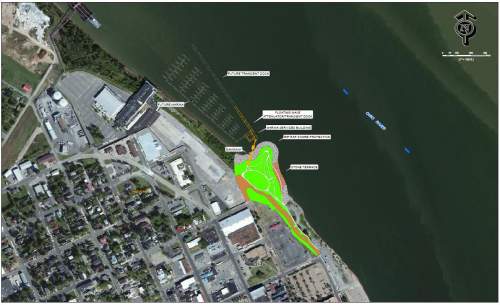 he Ohio River and installed the base of the transient dock gangway (12, 36-inch steel pilings).  The fill needed to settle at least nine months before the next construction phase could begin. This park expansion creates a downstream harbor that protects the transient dock and could be the site of a future marina.

In 2015, Phase I-B was initiated to complete the surface of the park and the 20-foot wide, 340-foot long transient dock that is capable of being extended to 1200 feet in length in later phases.  This transient dock provides boats of all sizes a location to dock and enjoy downtown Paducah by providing fuel, power, and sewer facilities.   Phase I-B was completed in the summer of 2017.

In March 2013, the project to construct a new boat launch facility with an 85-space parking/trailering lot at 6th and Burnett just downstream of the Paducah Expo Center began.  This project was completed in December 2013.  The Ohio River Boat Launch includes a five- to six-lane boat ramp with a gangway/courtesy dock.  The project also included improvements to Burnett Street from North 8th Street to North 6th Street over the floodwall to the new parking area and additional amenities consisting of landscaping and drainage improvements.  The facility has cameras and lighting.

As required under the National Environmental Policy Act (NEPA) of 1969, Federal agencies must consider the impacts ot the ecological, social, and cultural environments.  Since the Riverfront Redevelopment Project was funded through state and federal grants, the environmental impacts must be documented in an Environmental Assessment (EA) or an Environmental Impact Statement (EIS).  The EA, approved by the Kentucky Transportation Cabinet (KYTC) and the Federal Highway Administration (FHWA) in April 2012, was presented at a public hearing on May 30, 2012.  Public comments were incorporated into Finding of No Significant Impact (FONSI).

Video from May 30, 2012 Public Hearing for Riverfront Project

The Environmental Assessment document above is not the first one completed for this project.  A document was completed in November 2009; however, a petition was filed by an organization against the project location due to the concentration of mussels, some of which could be endangered, found in the Ohio River.  To satisfy the petitioner and limit the disturbance and mitigation of mussels, the project was moved 500 feet downstream.  This necessitated the completion of a new EA document, the one approved in April 2012.