Future Project - The City of Paducah has partnered with McCracken County and the McCracken County Sports Tourism Commission for the design and construction of an outdoor sports complex which would include softball, baseball, and soccer fields.  This complex will be built on the land that formerly housed the Bluegrass Downs horse track complex and Stuart Nelson Park.

The public can reserve certain picnic shelters for gatherings and reserve the softball fields.

About the Disc Golf Course 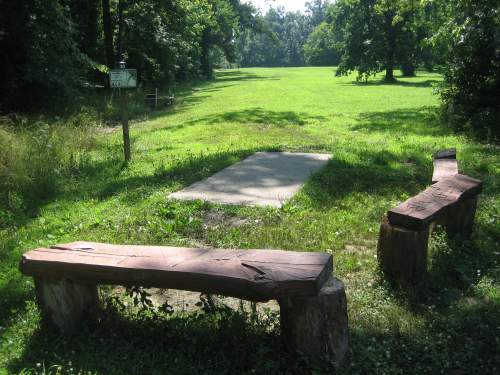 The City of Paducah opened the 18-hole disc golf course at Stuart Nelson Park in March 2007.

Disc golf is played like ball golf; however, flying discs and large baskets are used.  One stroke is counted each time the disc is thrown and when a penalty is incurred.  The winner is the golfer with the lowest score.  At each hole is a sign that shows the hole layout, the par, and the distance in feet.

The City of Paducah thanks West Kentucky Disc Golf Club member, Mark Koebel, in addition to other members for constructing benches out of logs at the various holes.  Paducah also appreciates the construction of a wooden bridge as a local Eagle Scout project.

For information about other courses in the region, visit Bluegrass Disc Golf Series.

About the Paducah Dog Park

The dog park is on an approximately 7-acre tract of land. As you enter Stuart Nelson Park, the dog park is on the right side (eastern end) with the large dog park closest to the park entrance.  The dog park has water spigots, fencing, shelters, gravel parking, and pet waste receptacles. The park is open seven days a week during the normal hours for Stuart Nelson Park, 6 a.m. until 9 p.m.  Immediately report any problems to the Parks & Recreation Office at 270-444-8508 or parkinfopaducahky.gov.

In 2010, the public fundraising began for a dog park at Stuart Nelson Park.  The City challenged the public to raise $20,000 toward the Paducah Dog Park, and then the City would match that amount - 85 different donors contributed to the park.  An official opening ceremony was held August 15, 2012.

PetSafe Bark For Your Park Grant and Dog Park Enhancements 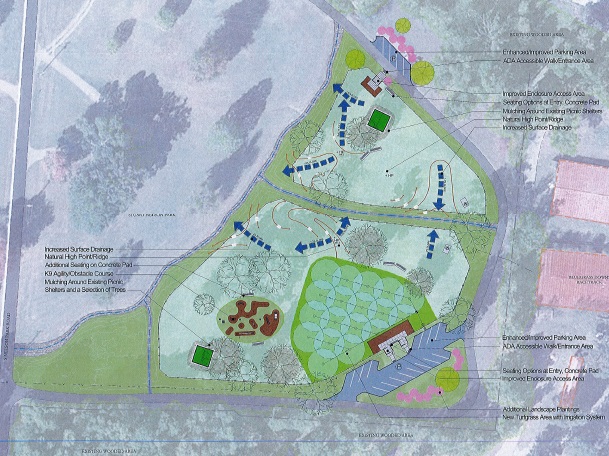 The Paducah Parks & Recreation Department hosted a public meeting April 26, 2018, to view the plans for Paducah Dog Park improvements.  Approximately 40 people attended and provided feedback on the enhancements which will be completed in phases.

The enhancements will be funded in part by the $10,000 Bark for Your Park grant through PetSafe® that the City received in August 2017.  Paducah is one of 25 cities that received the grant to implement irrigation and improve drainage and erosion issues at the Park.  PetSafe® received 215 competitive applications.  The City of Paducah contributed another $10,000 toward the project.

The first phase was completed from August through November 2018 with drainage and irrigation improvements and new turf grass over the newly irrigated section.  A grand reopening ceremony was held December 20, 2018.  Plus, the entrances to the dog parks sections were made accessible by providing concrete pads or pavers, and concrete pads were placed in the water fountain areas.  The next phase would include new benches, parking areas, walkways, and a dog obstacle course/agility area.

Pictured is a rendering of the phases.  The brown squiggly area is the proposed agility area (Phase II).   The blue arrows show the drainage flow pattern.  The green area with circles depicts the region that was irrigated with new turf grass (Phase I).

The City of Paducah thanks all of the sponsors who have contributed to the dog park.  Below are the Gold, Silver, Bronze, and Blue Ribbon sponsors.

Sponsorships:  There are a variety of sponsorship opportunities for individuals or companies to support the dog park.  Sponsorship Opportunities

Memorial Plaques:  In memory of a pet, the Parks and Recreation Department accepts orders for small printed plaques in the shape of a dog bone.  The plaques hang on the fence next to the entrance to the large dog section recognizing your support.  Each plaque costs $40 with the profit (approximately $25 per plaque) going toward the dog park improvement effort.  Dog Park Plaque Order Form

A dedication ceremony was held August 4, 2016, at Stuart Nelson Park to honor the park’s namesake, Dr. William Stuart Nelson, with the unveiling of historical marker #2495 through the Kentucky Historical Society.

Then mayor, Gayle Kaler, worked to to raise funds for the marker after reading a citizen editorial in the Paducah Sun newspaper written by Carolyn Stratton.  Mayor Kaler worked with the Paducah Board of Commissioners, the McCracken County Fiscal Court, the Parks and Recreation Department, the board of the W.C. Young Community Center, the Paducah chapter of the NAACP, the Paducah Human Rights Commission, local ministers, and other interested parties to collect donations and submit an application to the Kentucky Historical Society to make the historical marker a reality.

Mayor Kaler said, “I felt that it was important to recognize the accomplishments of our one of most important citizens.  Everyone can now understand the importance of Dr. William Stuart Nelson to the community’s history and thus to honor him as a great man of Paducah.”

Dr. Nelson was born in Paris, Ky. and graduated from Lincoln High School in Paducah.  During World War I he served in combat as a 1st lieutenant.  Returning to his studies, he earned a Bachelor of Arts degree from Howard University in 1920 and a divinity degree from Yale in 1924.

A professor of religion at Howard, Nelson studied at the Sorbonne in France in 1925 and was the first black president of Dillard and Shaw universities.  Returning to Howard, he served as dean & vice president.  He marched with Gandhi and Dr. Martin Luther King, Jr. and wrote several books and papers on non-violent resistance.  This park was named for him in the 1940s.