About the Greenway Trail

The Clyde F. Boyles Greenway Trail extends more than 5 miles linking residential neighborhoods with several city parks, the McCracken County trail system, and the riverfront. The trail is open to non-motorized traffic from dawn to dusk. Distance markers, shelters, and benches are located along the trail.

To access the trail, park either at Stuart Nelson Park (trail is in the back of the park), Noble Park near the ballfields, the Convention Center, or riverfront. The trail links the following parks: Perkins Creek Nature Preserve  |  Stuart Nelson Park  |  Noble Park   |  Schultz Park and Riverfront

The Greenway Trail plan was initiated around 2001. The Clyde F. Boyles Greenway Trail is funded in part thanks to income from an endowment from the Boyles estate.  Lanelle Boyles, who died December 31, 2005, bequeathed a portion of the estate to the City of Paducah to be used for walking and biking trails in memory of her husband, Clyde F. Boyles.  The endowment is managed by the Community Foundation of West Kentucky, Inc.

The City has set up a Greenway Trail Donation Fund to accept monetary donations for use in the ongoing construction of the Greenway Trail.  Make your tax deductible contribution to the City of Paducah.  Send your donation to 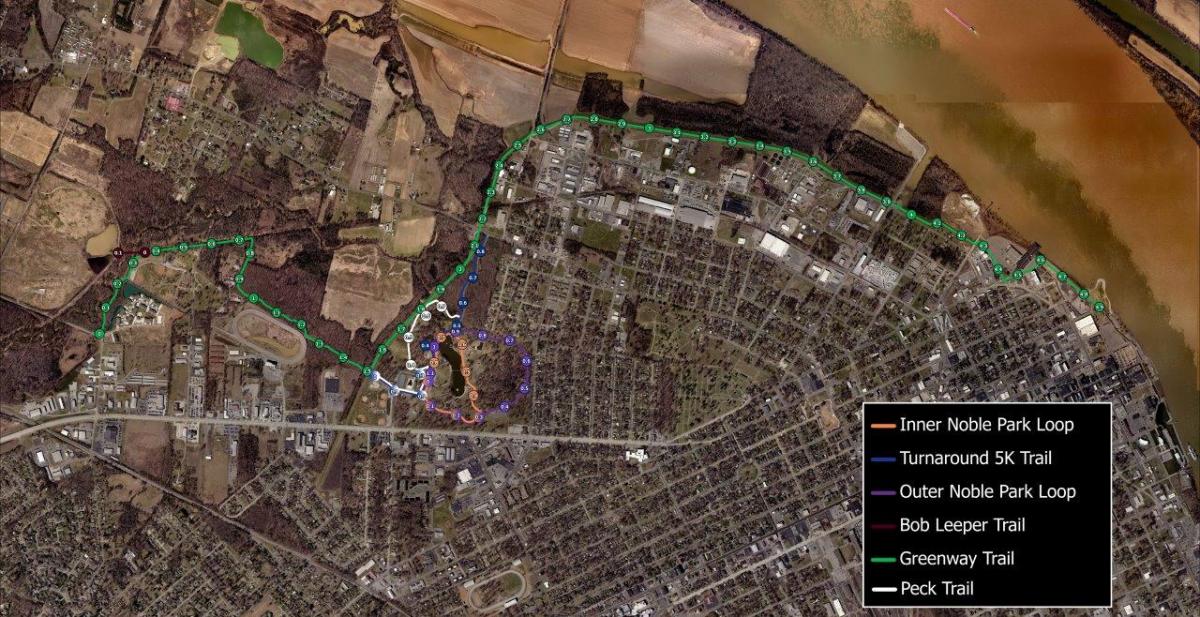 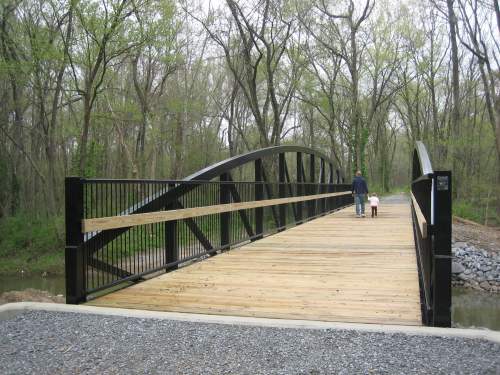 This segment of trail is mainly a fine rocky surface which is soft for walkers and joggers but great for bicyclists, too. There are mile markers every tenth of a mile. The trail extends from County Park Road to Noble Park. The best locations to access the trail and park are at Stuart Nelson Park and Noble Park.

Photo location - There is a beautiful bridge (pictured) on the trail near the 0.7 mile marker close to Stuart Nelson Park.

The trail winds behind the former Bluegrass Downs and bisects the Disc Golf Course at the back of Stuart Nelson Park. At Noble Park, the trailhead is next to the Skatepark and the ball fields. This was the first completed section of the Greenway Trail with a ribbon cutting on July 1, 2008. 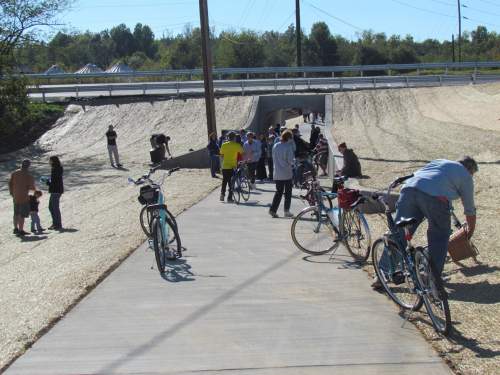 This Greenway Trail section is concrete. The best place to park is next to the Skatepark at Noble Park.    It is between Noble Park and North 8th Street/U.S. 45 is 6,200 feet (1.2 miles) in length with quarter mile markers.  It begins at Noble Park next to the Skatepark and winds along the top of the floodwall earthen levee. The trail crosses Cairo Road with signage and pavement markings to alert the trail-users and drivers.

The trail also includes a 52-foot long lighted pedestrian underpass with a beautiful mural (great photo stop!) to allow the safe crossing of North 8th Street/U.S. 45. The underpass involves trail-users taking a gentle path off the floodwall levee, traversing the short underpass, and then going back up onto the levee.  Retaining walls are on either end of the underpass as you go up and down the levee.

Construction began in 2013 and was finished in the fall of 2014.  A ribbon cutting ceremony was held October 22, 2014.  This phase was funded in part by a federal Transportation Enhancement grant.

To learn more about this phase and the decision to construct an underpass for the North 8th Street crossing, please watch the February 19, 2013 City Commission meeting, view the Greenway Trail Underpass Slides, or read the March 3, 2013 Letter to the Editor submitted by the City of Paducah. 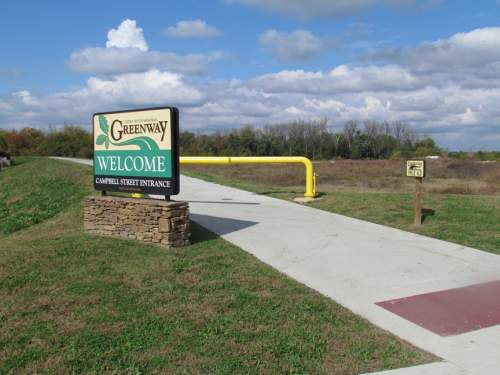 This concrete trail section connects to the underpass at U.S. 45/North 8th Street near the Brookport Bridge and winds along the top of the earthen levee toward downtown ending at Campbell Street next to the Paducah-McCracken County Convention Centers.

The best place to park is at the Convention Center or access the trail from Noble Park at mile marker 1.5.

This section of the Greenway Trail was funded in part by a 2006 federal Transportation Enhancement grant. After an official groundbreaking on August 3, 2012, this segment of trail was completed in 2013. 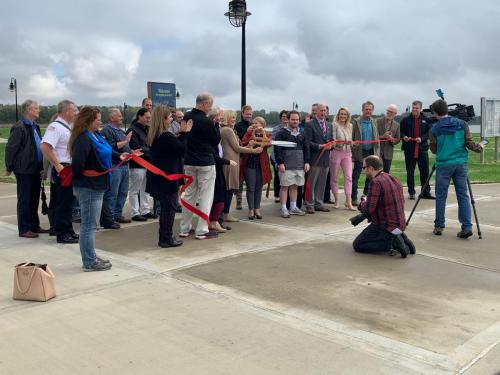 This Greenway Trail section starts at Campbell Street near the Convention Centers and heads toward Schultz Park on the riverfront.  The trail navigates pedestrians and cyclists along a path next to the concrete floodwall in front of the Convention Centers, goes across the parking lot behind the Holiday Inn Paducah Riverfront, and then joins with the new Riverfront Project adjacent to the Transient Boat Dock.

The project involved adding approximately 3500 feet of trail and 1300 linear feet of sidewalk in addition to lighting, benches, a shelter, and trash receptacles.  The City received a $520,000 Transportation Alternatives Program (TAP) grant.  The ribbon cutting for this section of trail (called Phase IV) was October 28, 2019.

This newest section of trail stretches from Jefferson Street through Schultz Park along the riverfront.  This project added 900 feet of walking/biking trail with landscaping and lighting and improved the vehicular traffic flow through Schultz Park. For safety and to improve the traffic flow through the park, the Monroe Street floodwall entrance is permanently closed to vehicular traffic.

The large columns in Schultz Park are a focal point. They are historical remnants of a rail cart system formerly used to transport sand out of the river in order to make concrete.

This segment called Phase V is funded primarily with a Federal Highway Administration Transportation Alternatives Program grant administered by the Kentucky Transportation Cabinet. The City’s match is funded from the Boyles Estate Community Foundation. The ribbon cutting celebration was September 25, 2020.

An application will be made in the future for grant funding to extend the Greenway Trail west through Perkins Creek Nature Preserve.  This extension would provide nearly another mile of trail which would be a combination of paved and densely packed gravel with raised walkways.